The Spectacular Volcanos of the Aeolian Islands

The Aeolian Islands are an archipelago of seven islands formed by volcanic activity off the northern shore of Sicily close to the southern tip of Italy. Two of the islands are still active volcanos and all of them are spectacularly beautiful and unimaginably varied. Black sand beaches, smoldering craters, steaming bubbling fumaroles, thermal waters and rocky coastlines await us. Lipari has been a center of trade and industry since before the Bronze Age and Stromboli has been erupting continuously every 15 to 20 minutes for thousands of years.

We hope you choose to join us on an exciting adventure in Sicily. Volcanos both dormant and active await you and this region is truly spectacular. You can hike up volcanos, swim in sparkling blue water, dive and watch amazing sunsets. Here is all the information you need to move forward with your booking. Please use the button on the right to book a time to have a zoom call with us to ask all your questions or fill in the form below for a booking inquiry. Alternatively, contact us in the chat box in the lower right of the screen or by mail with any questions.

Your Home in Sicily 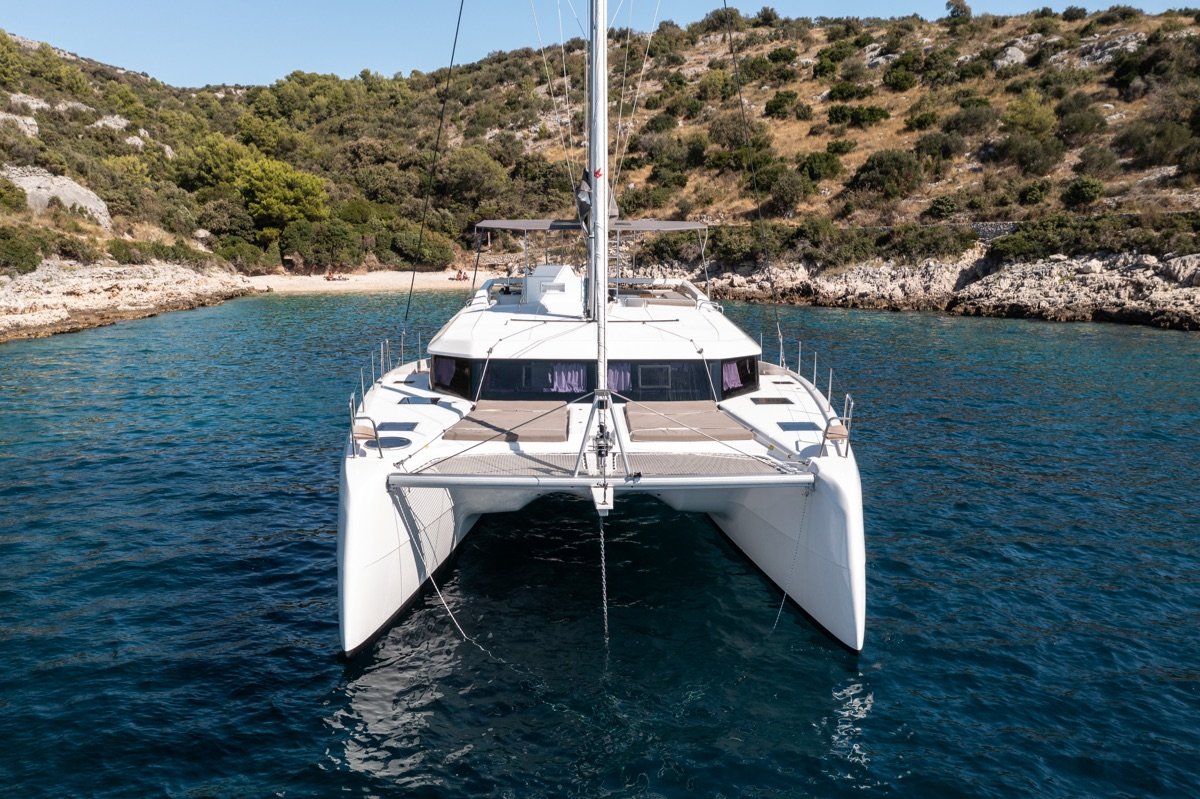 Meet “Eden Planet” – your home in Sicily. This stunning Dufour 48 catamaran has 4 double cabins and a single with 2 bunks for crew or kids. Each cabin has its own en-suite bathroom and shower and the catamaran is just under 15m long and 8m wide. The expansive salon and flybridge provide ample room to spread out to find a quiet area to read or relax with cushion around to sit with your Happy Hour drink and watch the sunset. The boat is fully air conditioned and has its own generator, water maker, ice maker, 3 fridges, barbecue (parev and fleishik) and most importantly an espresso maker! 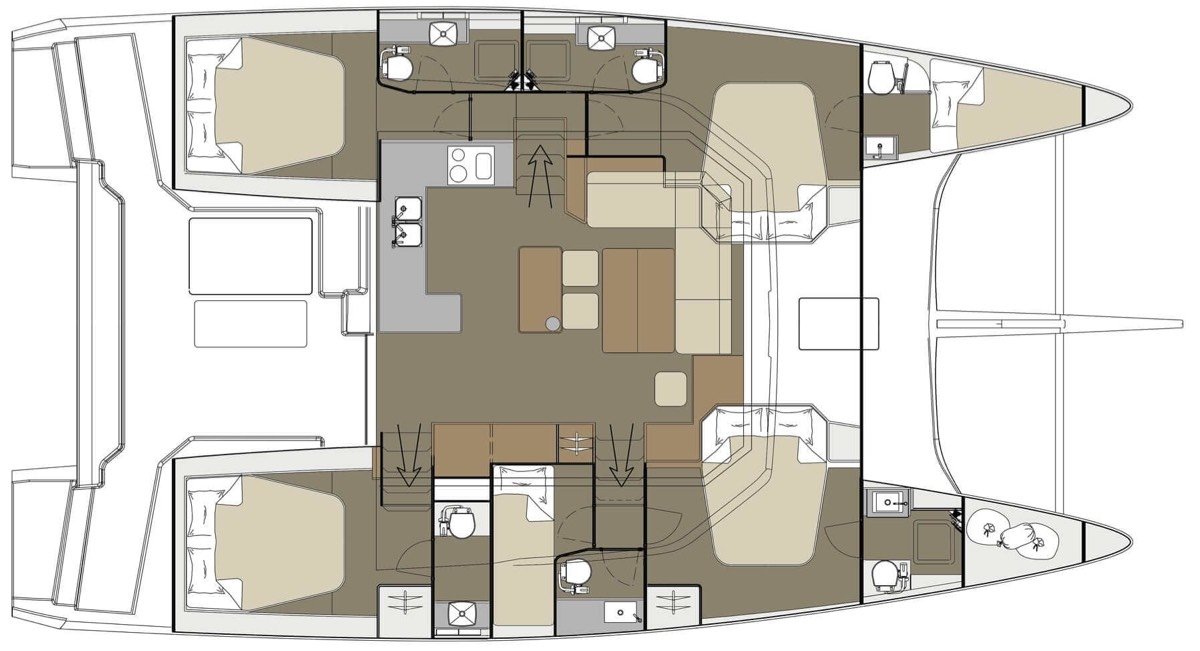 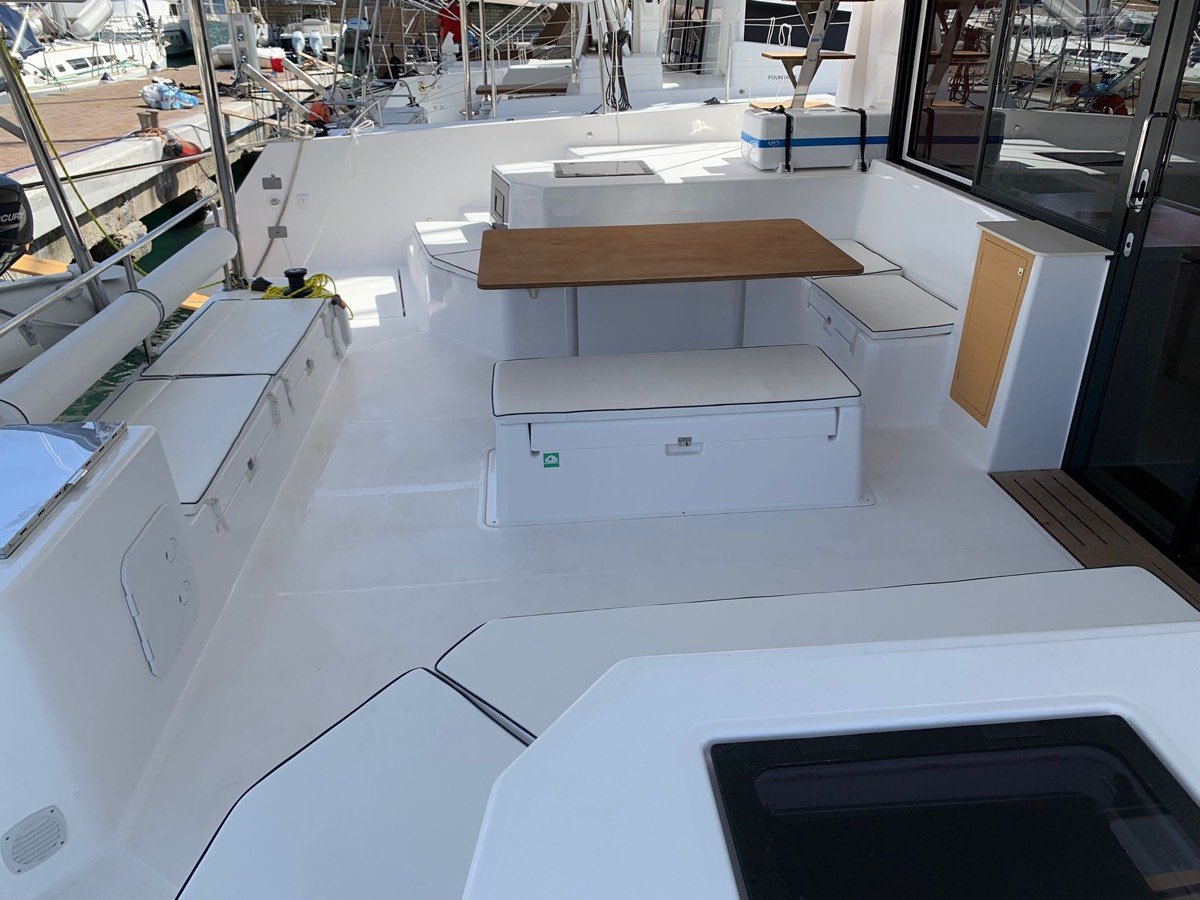 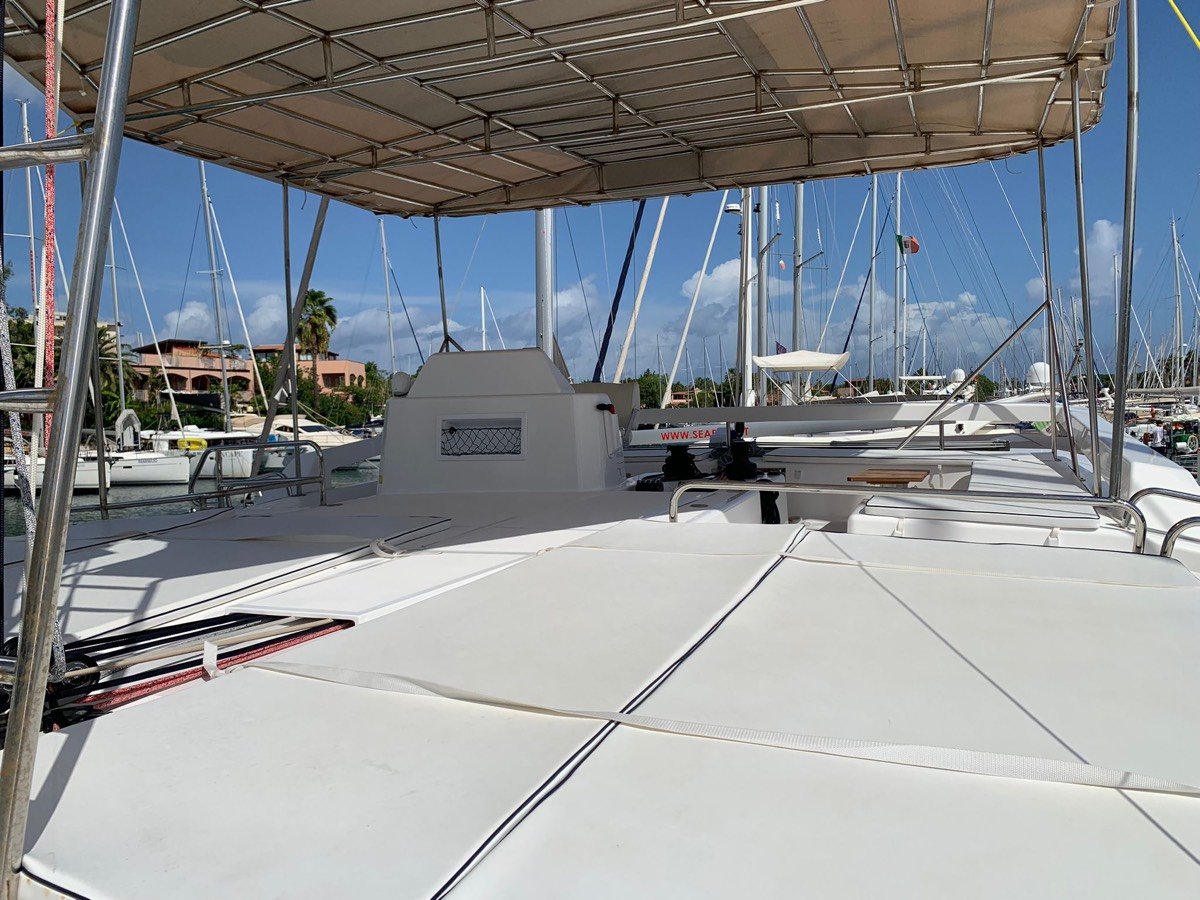 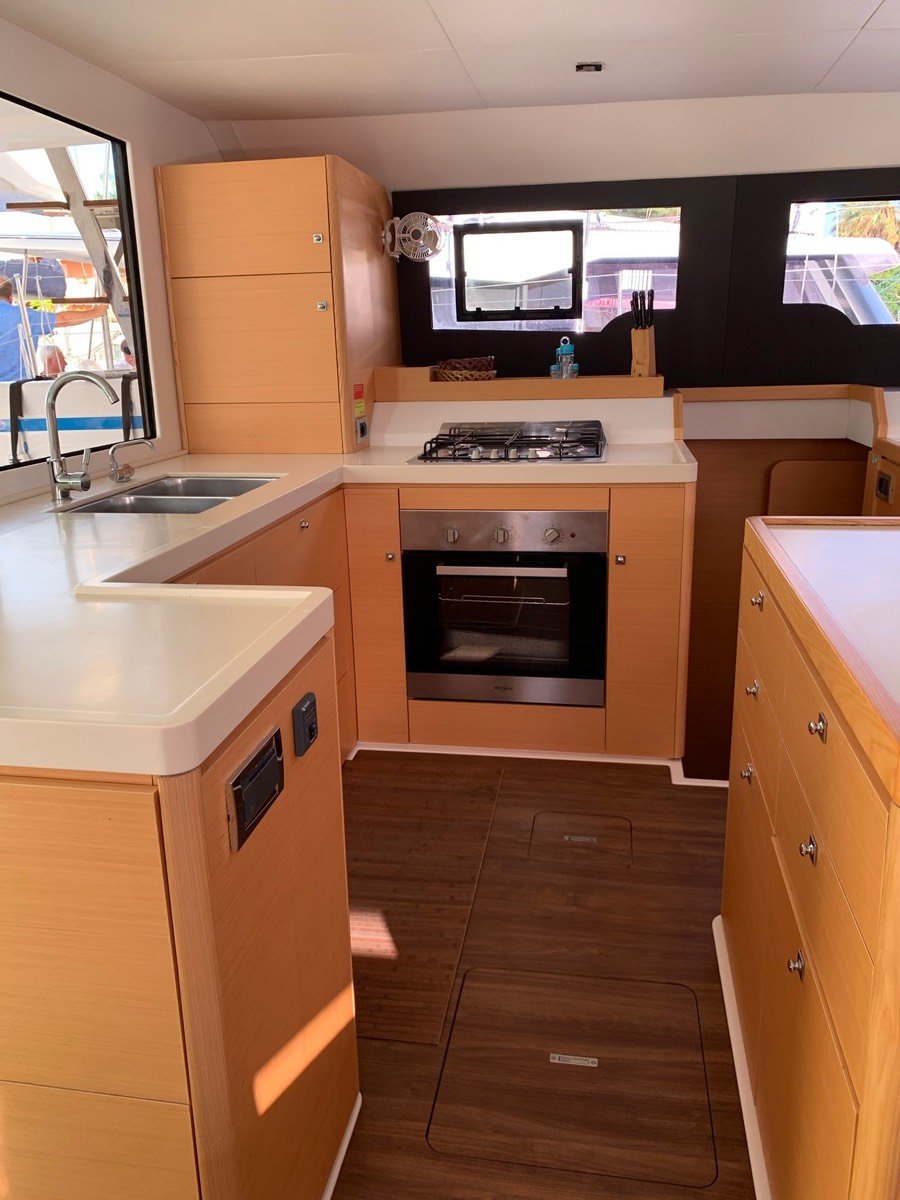 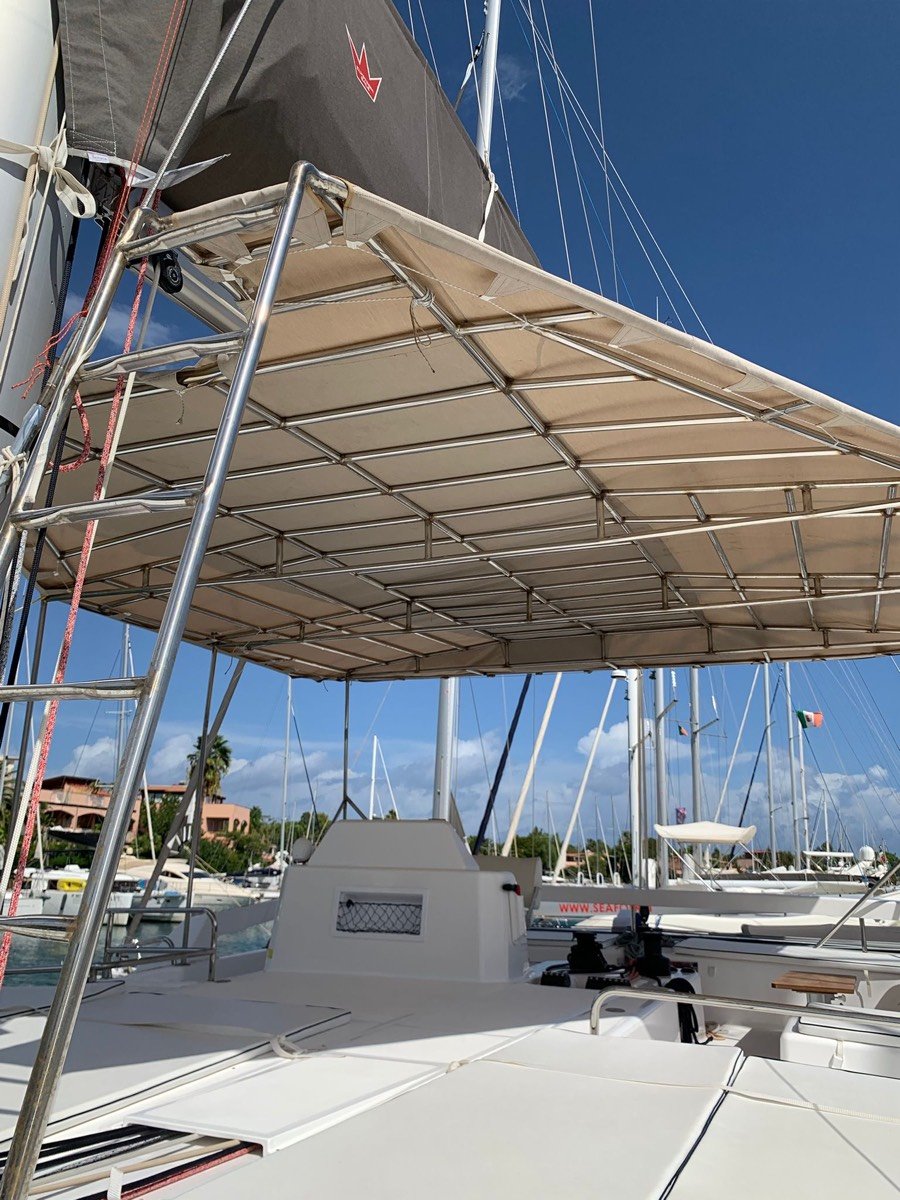 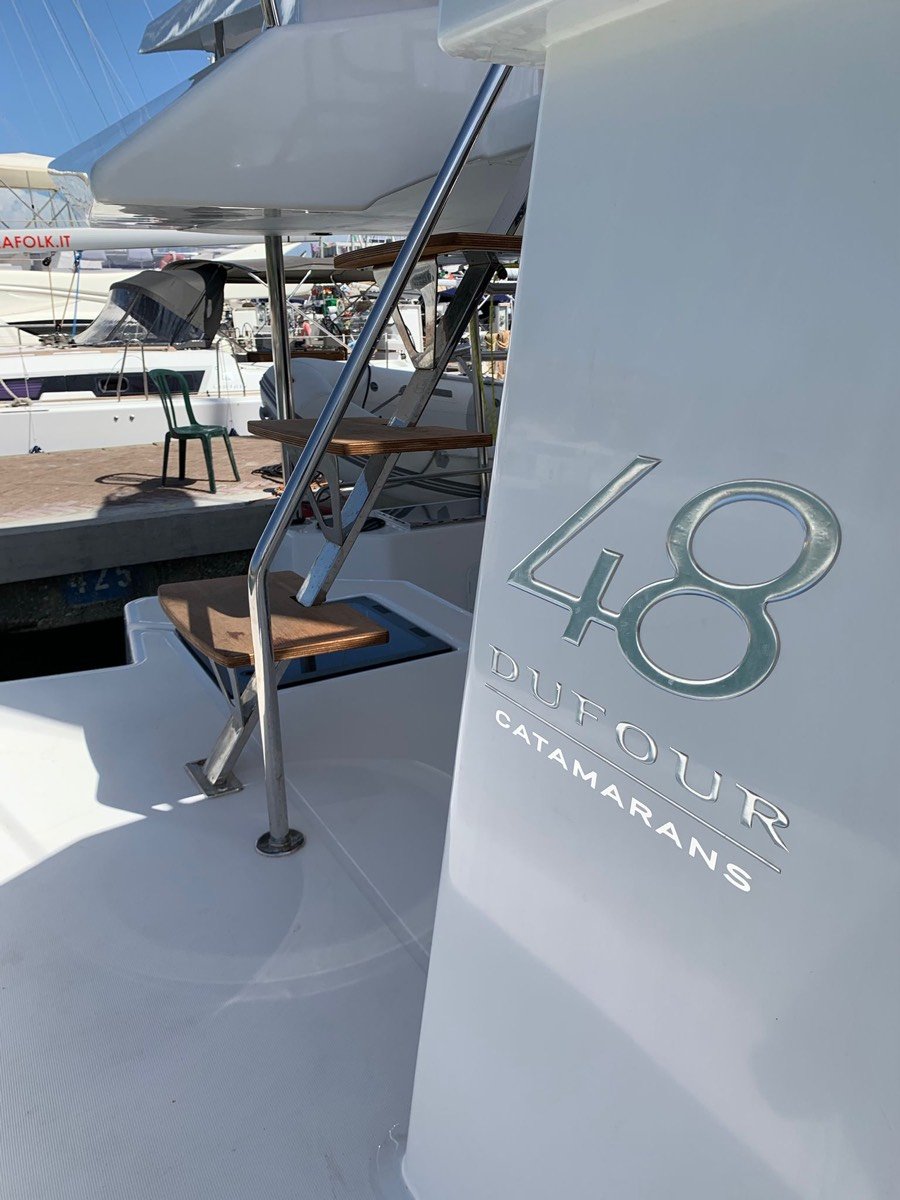 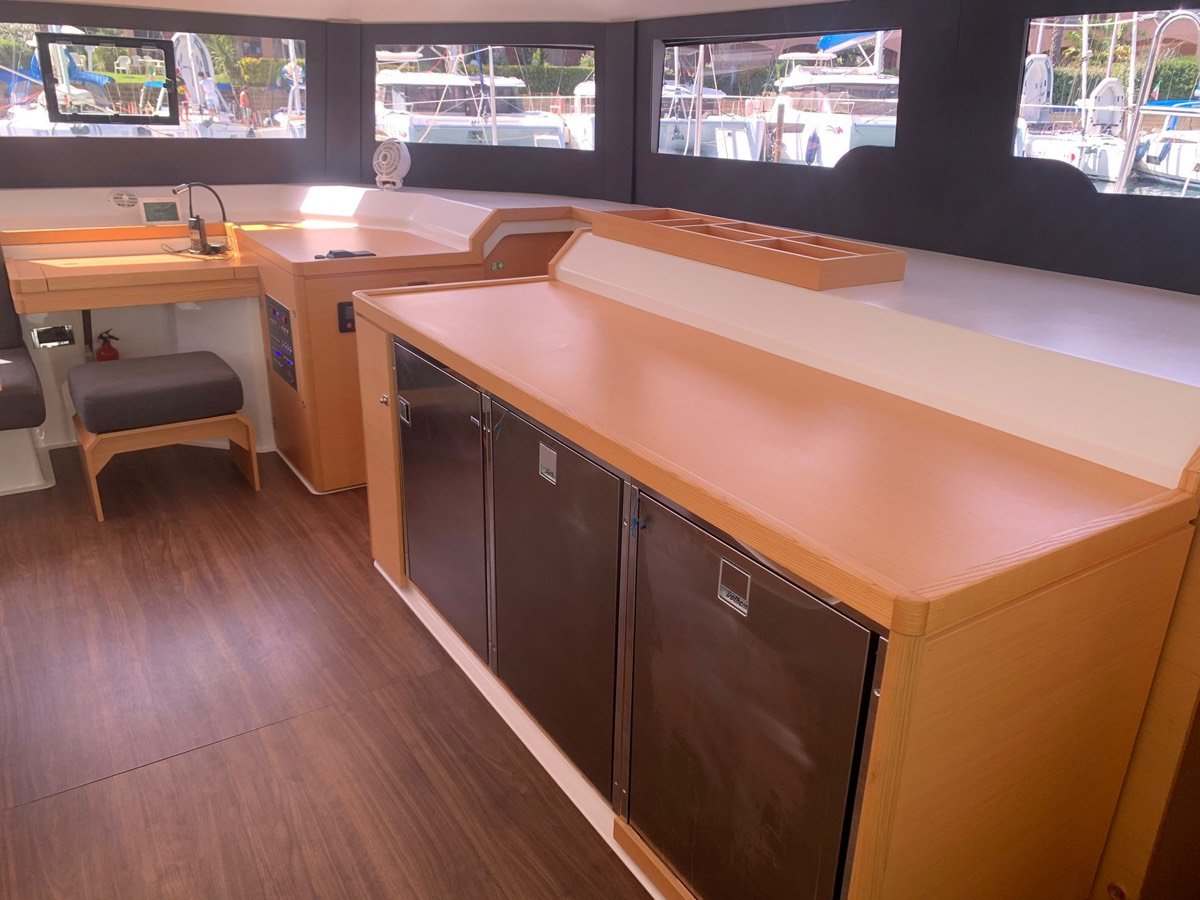 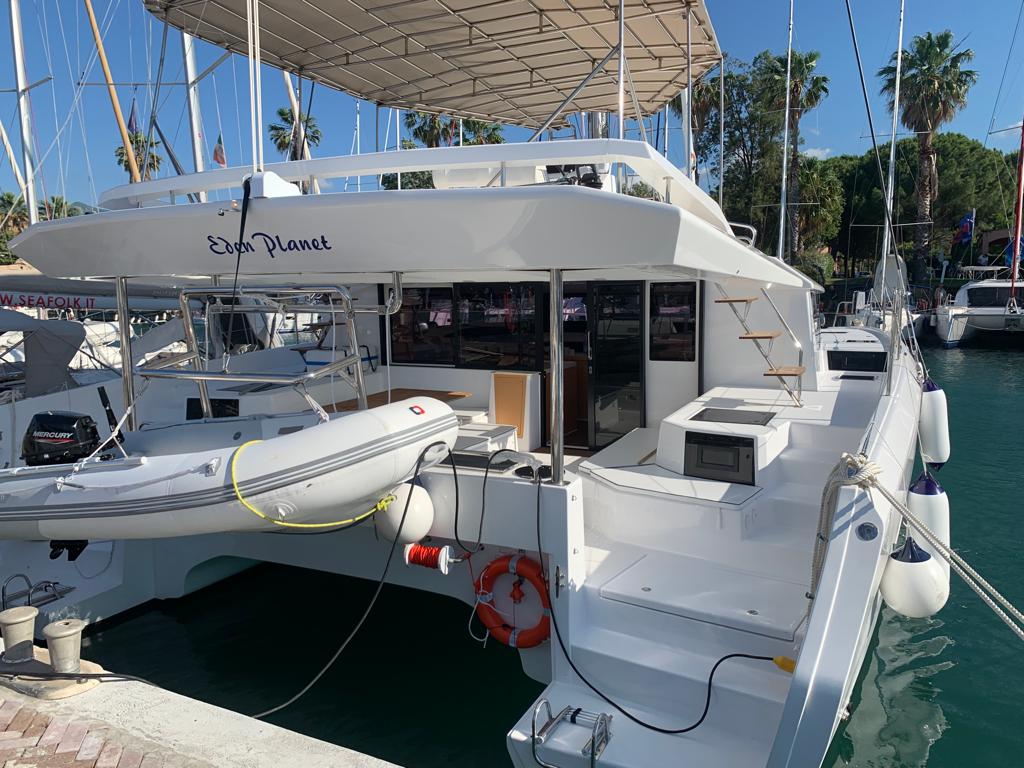 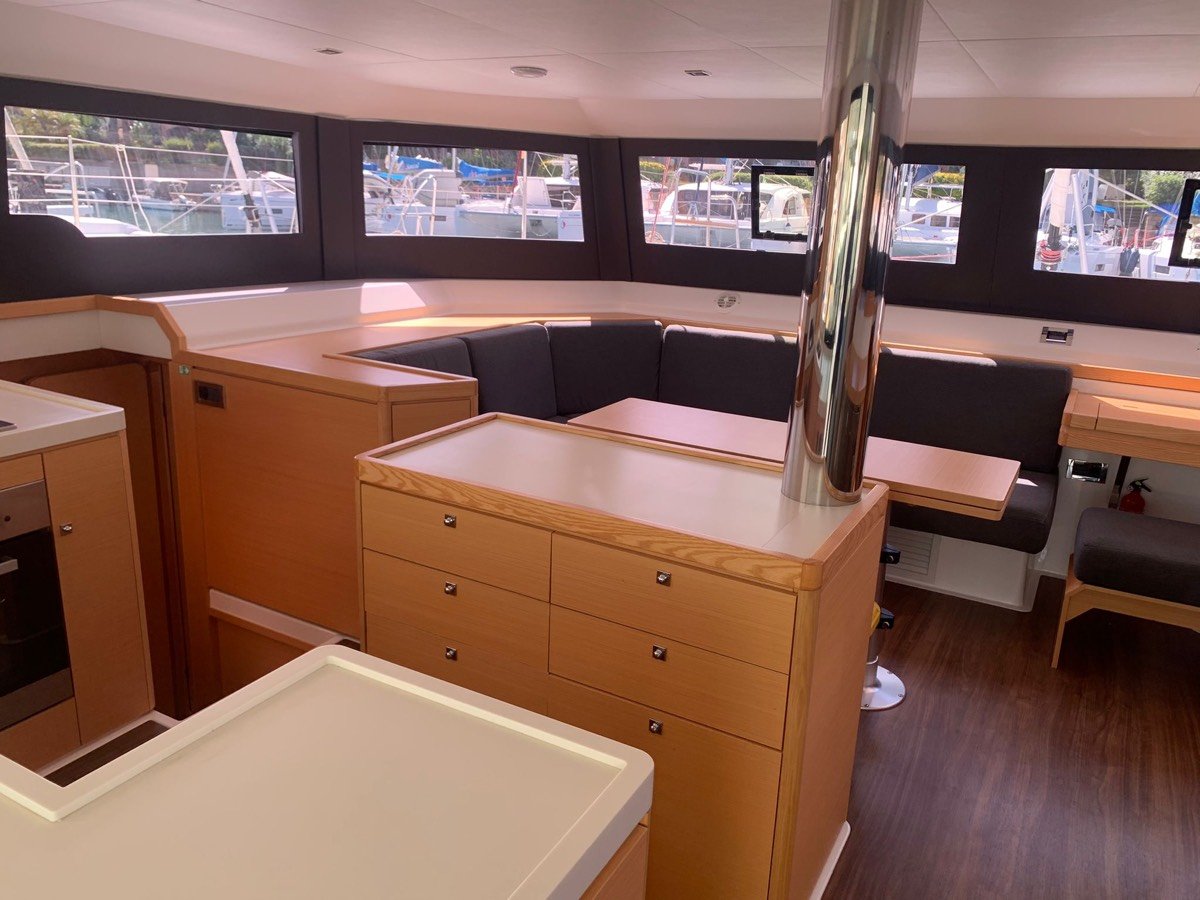 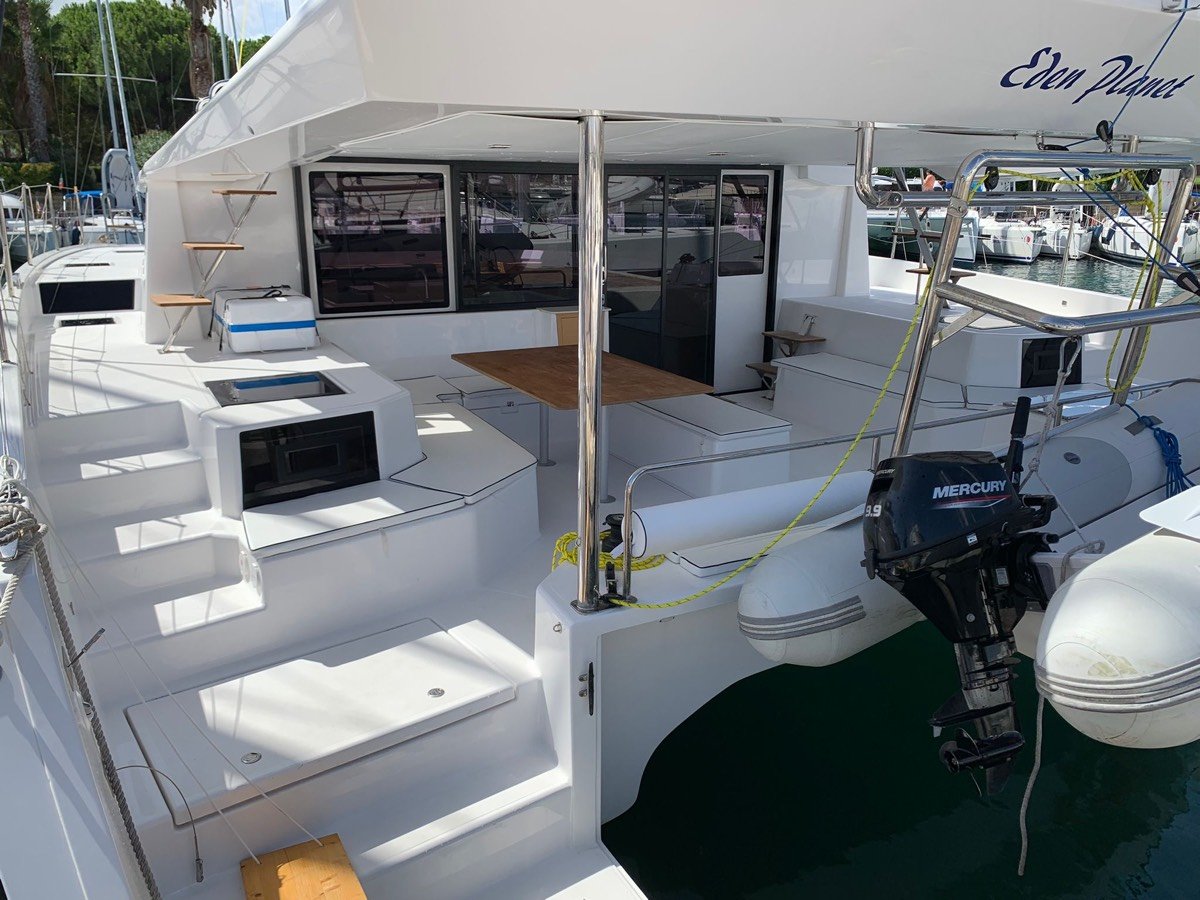 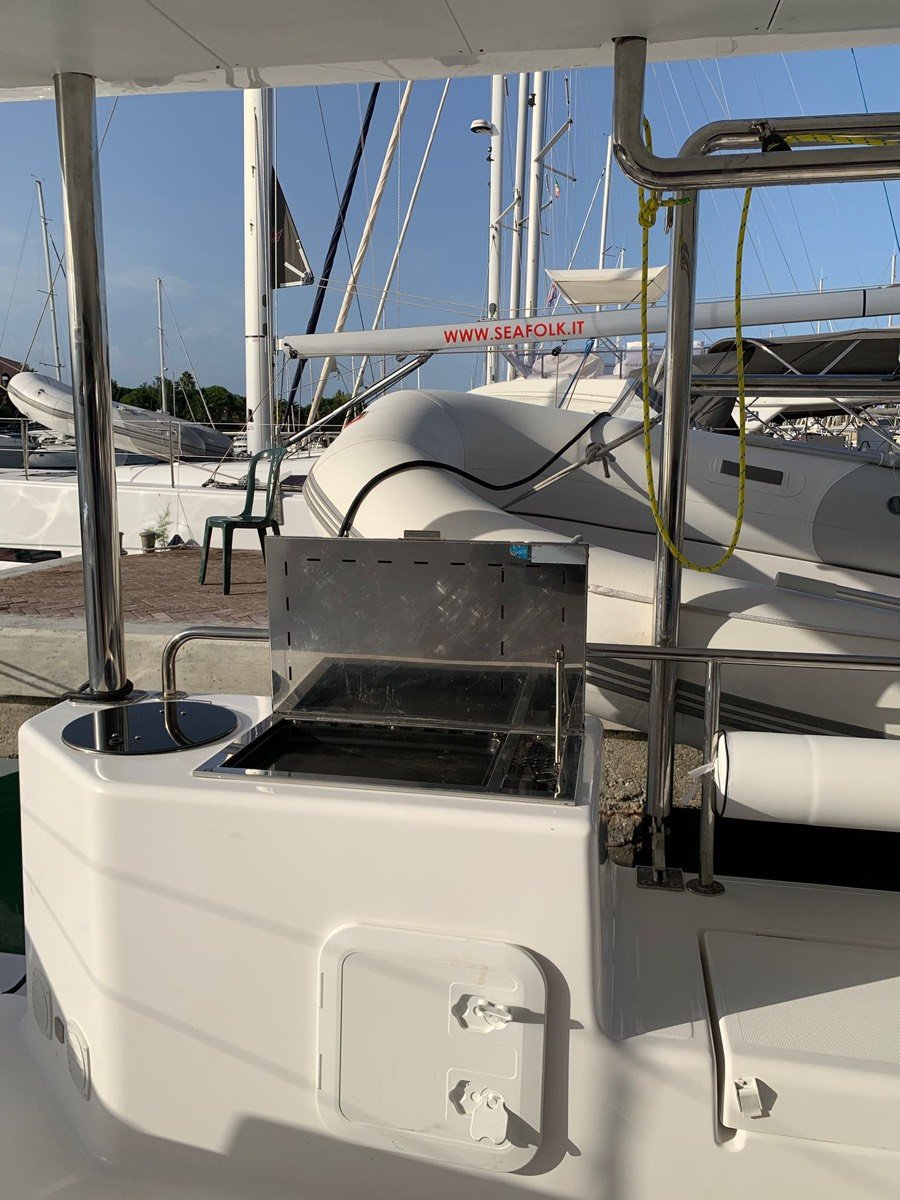 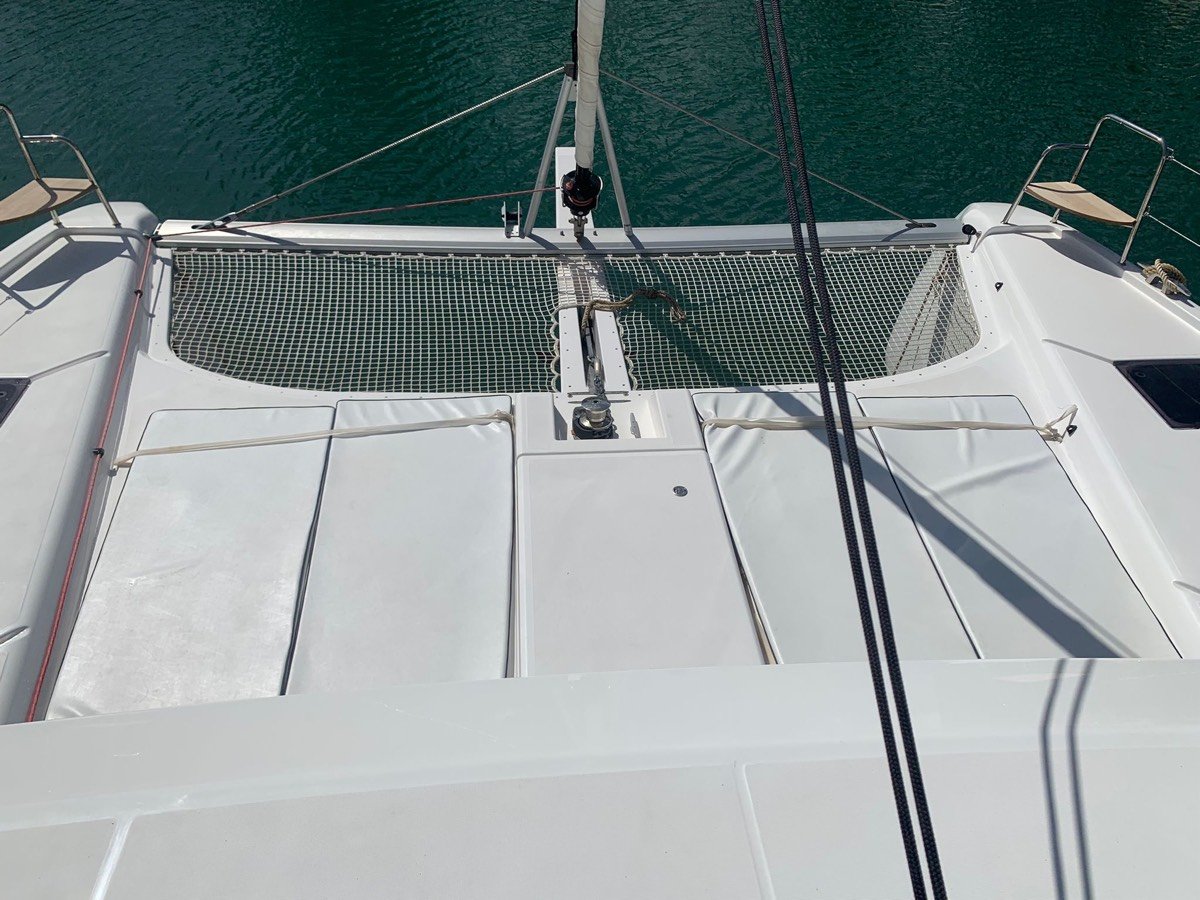 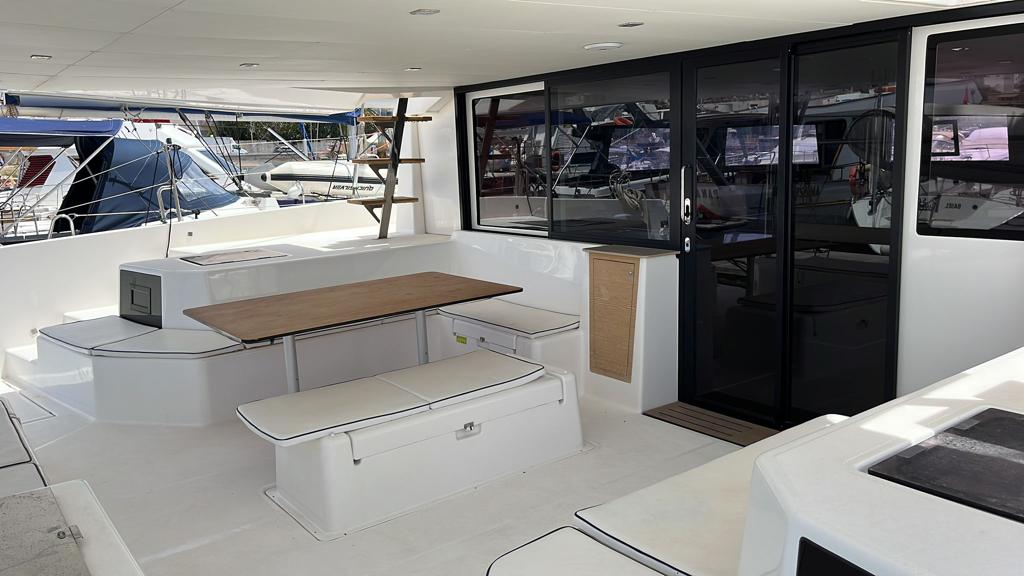 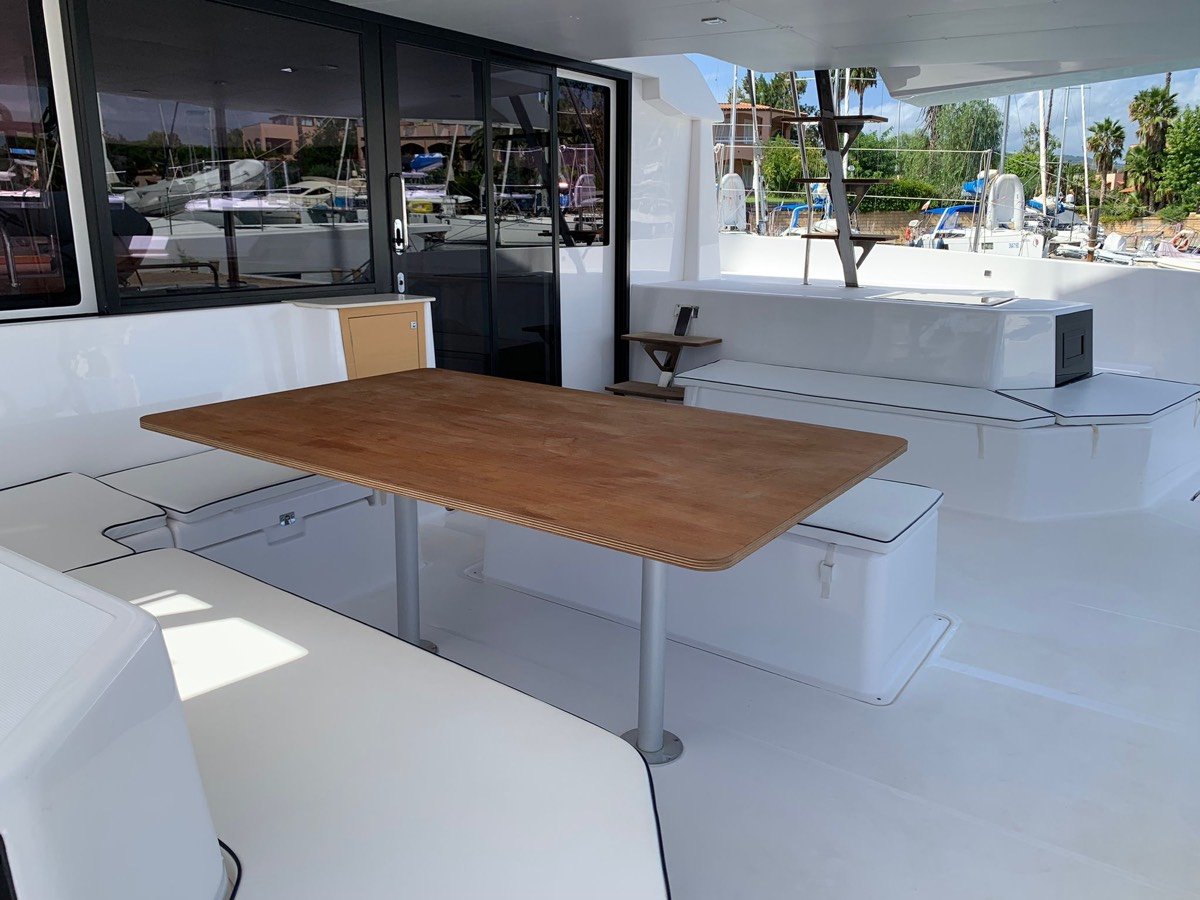 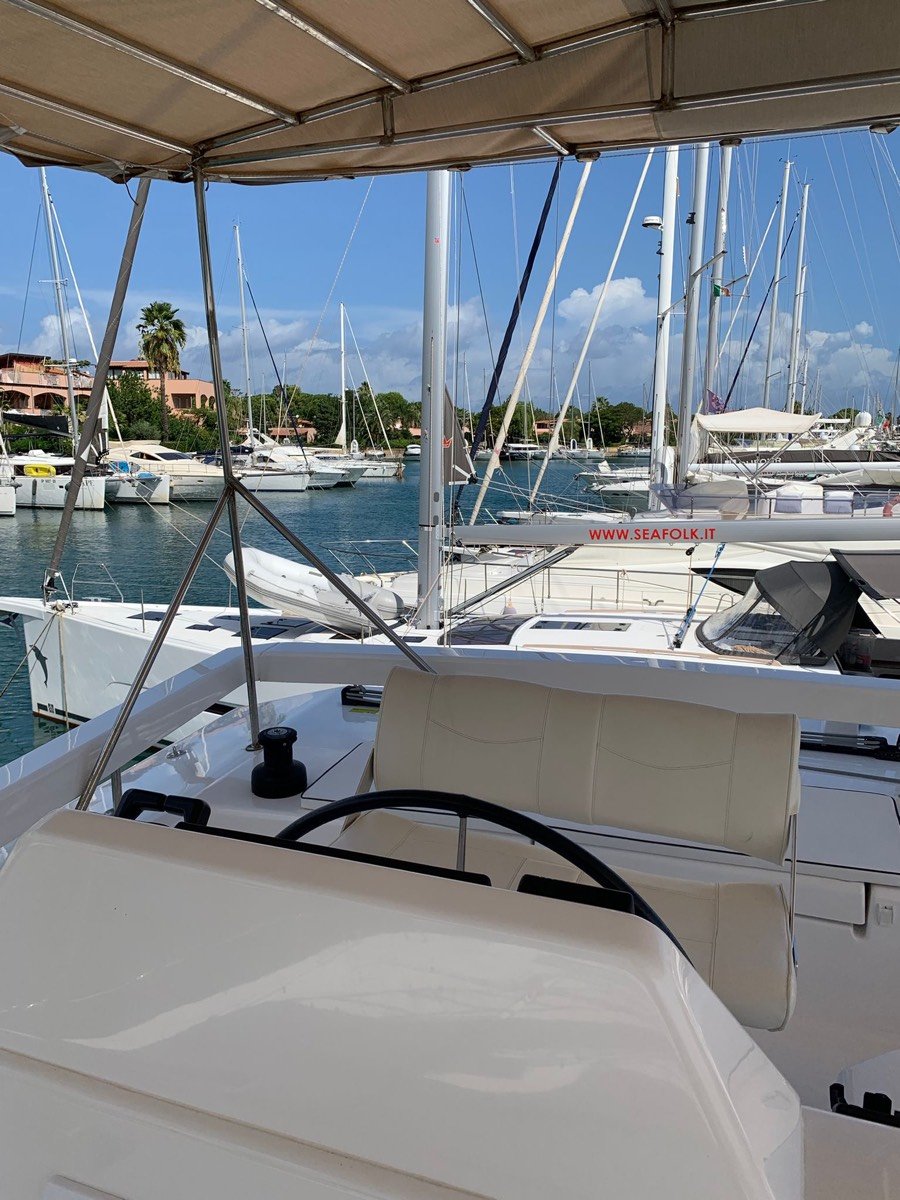 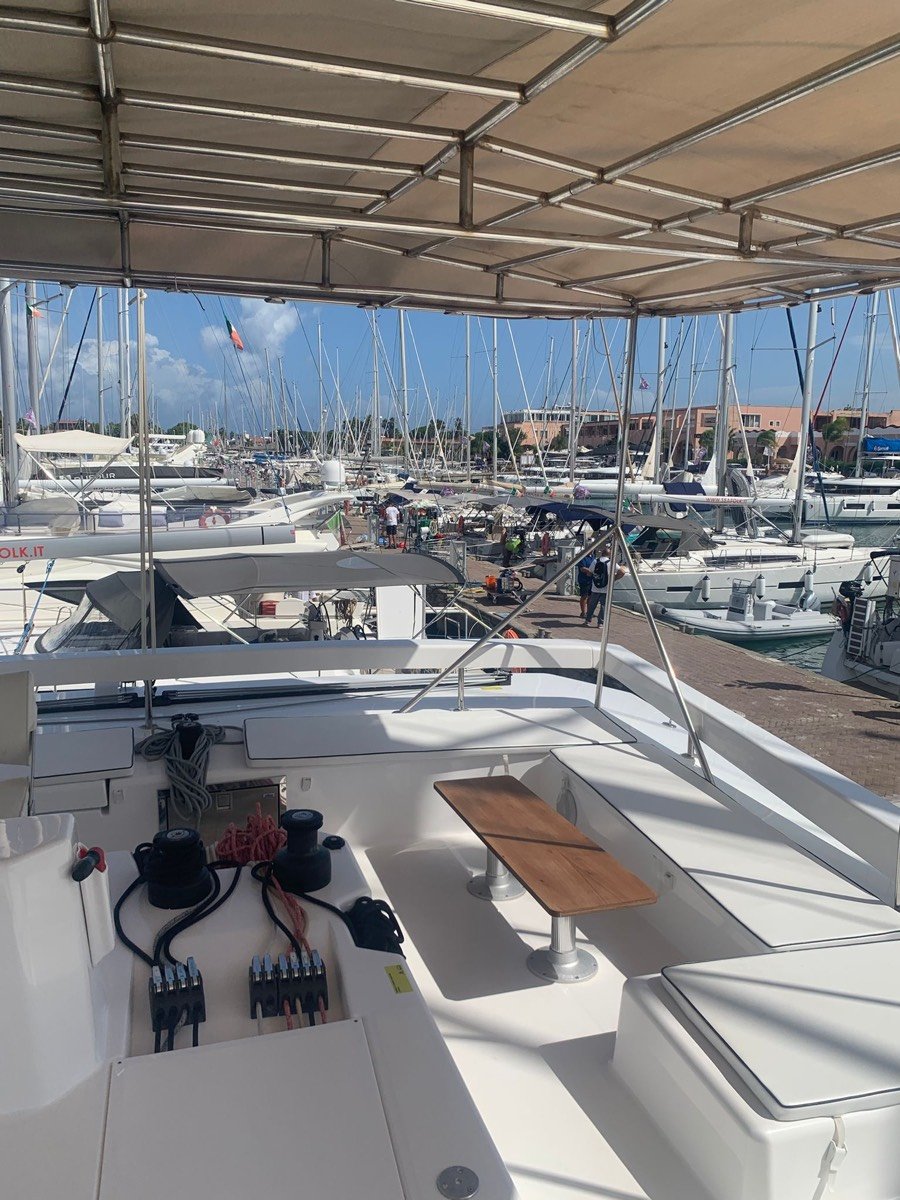 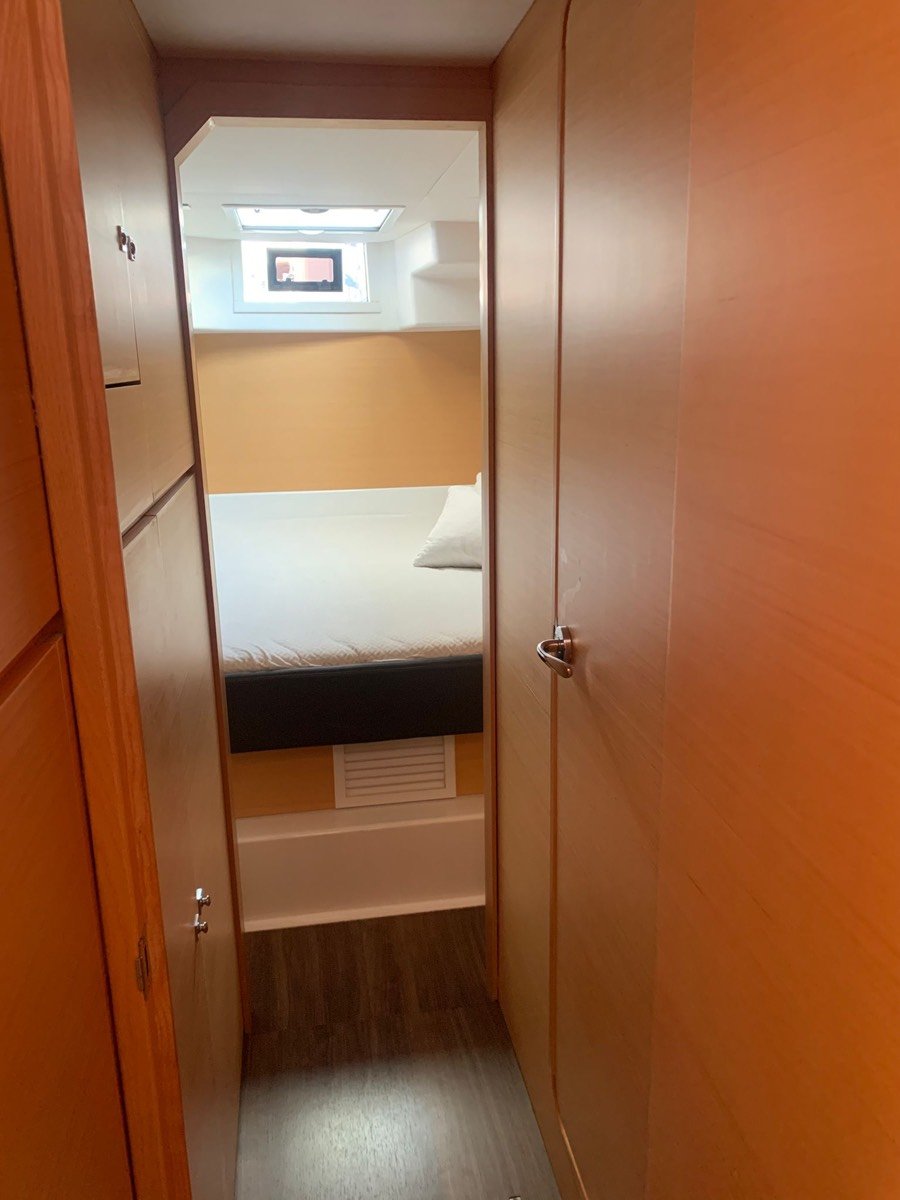 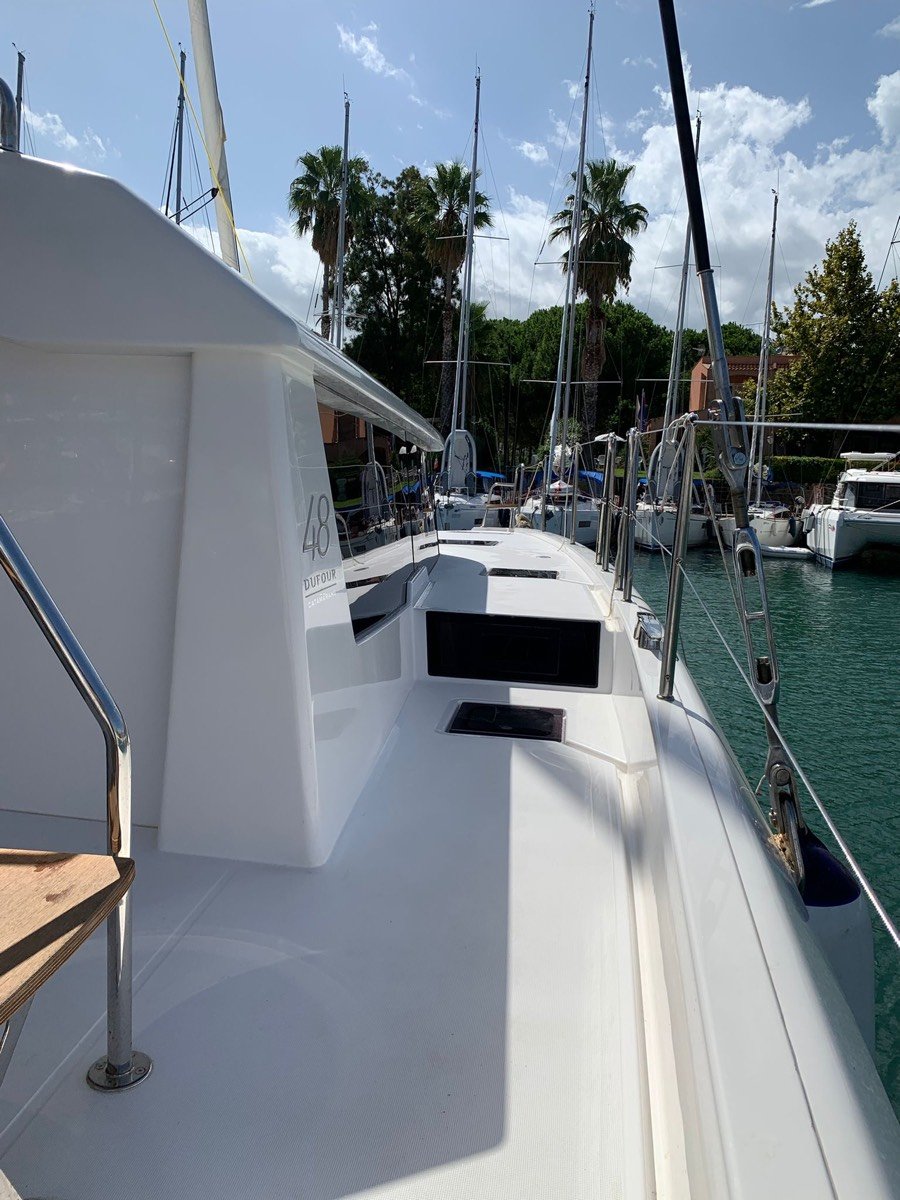 Loading the next set of gallery items...
Load More

We’ll be waiting for you at Portorosa at 14:00, with a freshly made cocktail (the first of many!). You’ll get a tour of the boat, shown to your room and then we’ll sit down for a thorough briefing covering all the safety and operational details you need to know.

When everyone has settled in, we’ll leave the marina at around 15:00 for a 2-3 hour sail past the island of Vulcano, reaching the island of Lipari where we’ll drop anchor for dinner and our first night of adventure.

You’ll have your first spectacular views both of Stromboli and of the region. 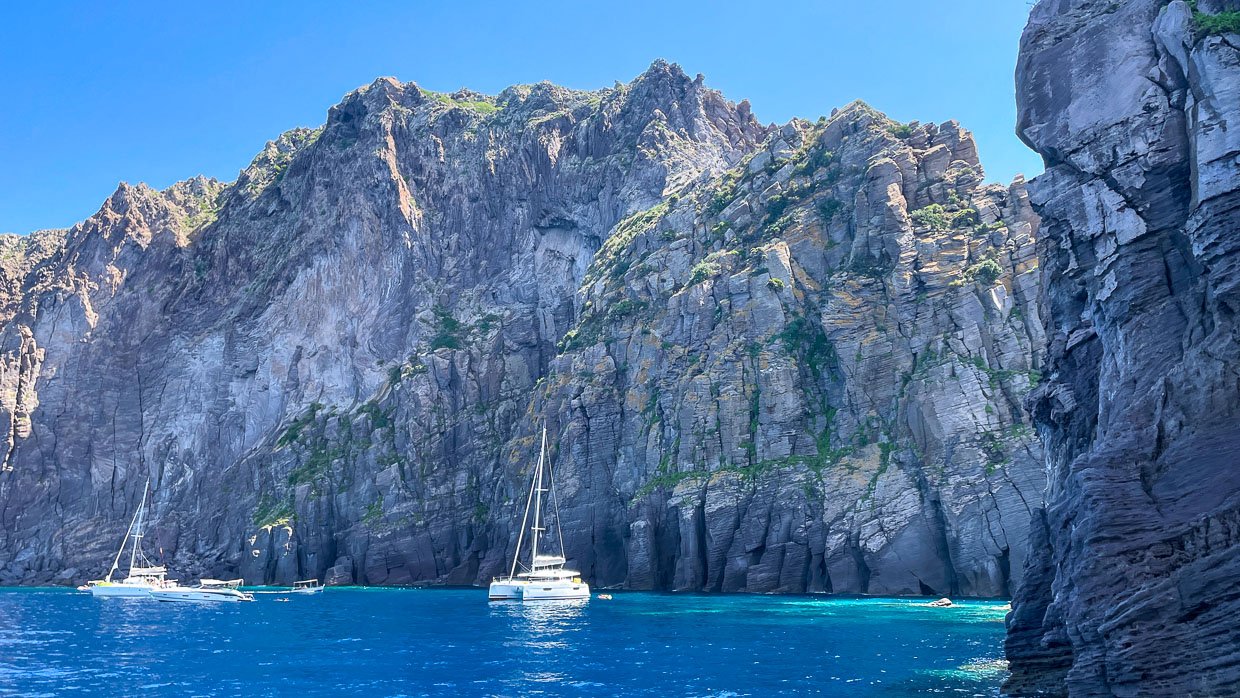 Panarea is the smallest and most picturesque of the Aeolian Islands and the most exclusive as over the last few years it has been transformed into a celebrity haven. The West coast is uninhabited and the East side has the concentration of the population.

After visiting Panarea, we will continue to Stromboli, arriving early evening where we’ll have a sunset dinner and wait for night to fall when we will move around to the west of the island and watch the Stromboli firework show. The volcano has been erupting regularly for thousands of years, so we have every expectation of getting a breathtaking show.

Depending on weather conditions, we will either anchor for the night at Stromboli or return to Panarea where we may anchor in Junco Cove, at the foot of Milazzese Cape where the remains of an ancient prehistoric village are located. 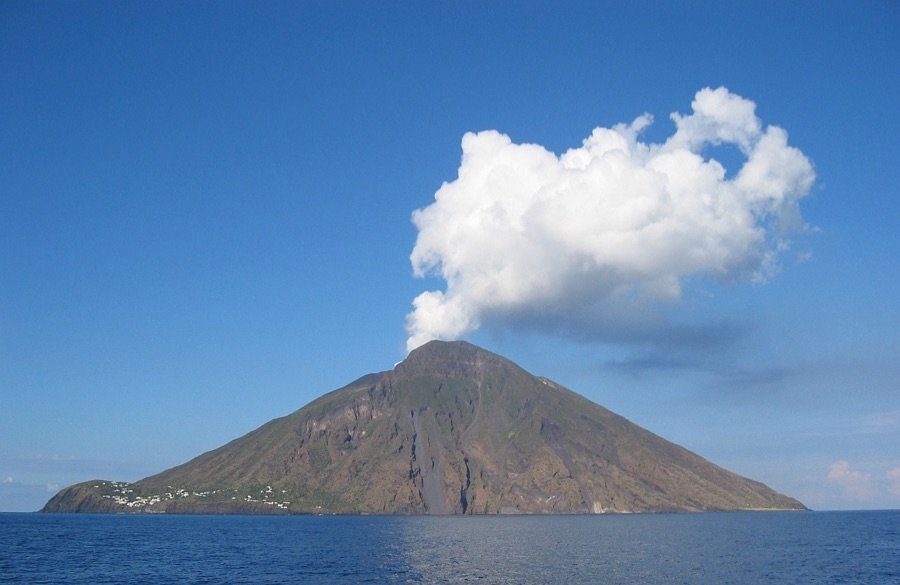 Salina is a volcanic island with two inactive volcanoes located on each end of the island. In the middle of both lies the Valldichiesa Valley. We may circumnavigate the entire island to take in the spectacular views.

Salina was awarded the title of “Most beautiful island in Italy” by CNN in 2019, is the second largest of the chain (roughly 26 square kilometers of surface), and has a vast cultural heritage, rich history, and lush natural vistas to explore. 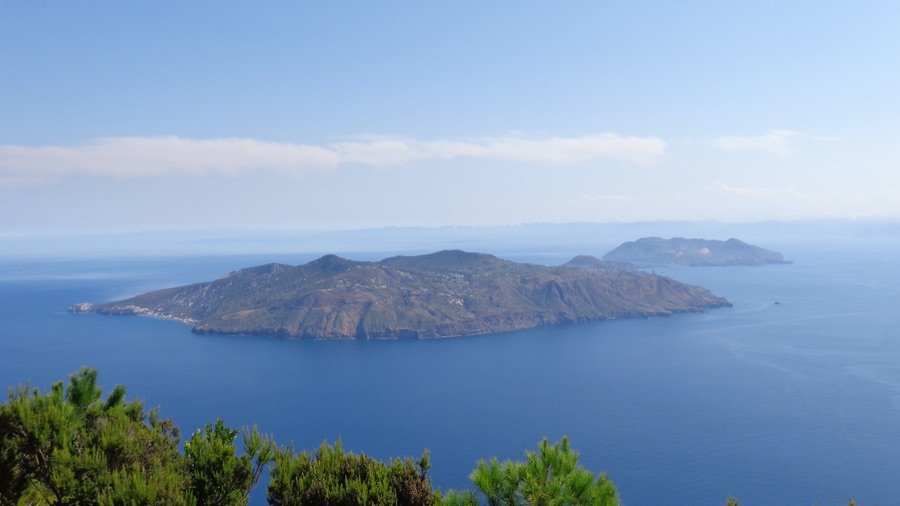 We’ll arrive in Lipari early afternoon and do some shopping and cooking for Shabbat. Friday night kiddush and dinner will be followed by a well earned rest and on Shabbat day, you will be invited to a 2 hour walking tour of the old town of Lipari with a local Sicilian guide who will explain history, culture and geography and answer all your questions.

In Lipari town, you can tour the castle, walk through the narrow streets and explore the history of this island known for its pumice quarrying!

Options including hiring a tour guide and/or a car to drive around the island. 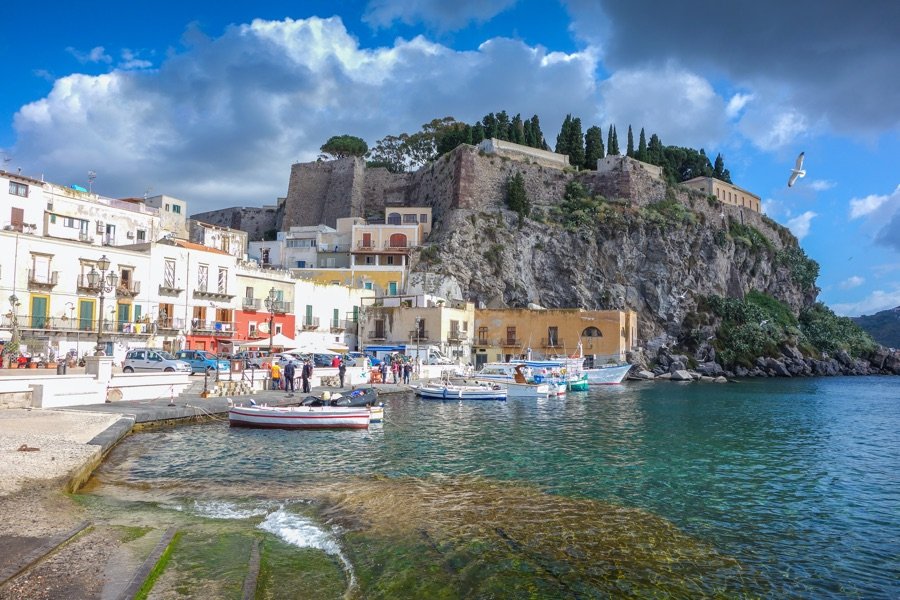 For anyone interested in scuba diving, the west coast of Filicudi offers some amazing locations and for those who want to stay at sea level, we can explore the sea caves at the Grotte del Bue Marino. La Canna, a basalt cliff that rises 70 meters from the sea is also another main attraction for scuba divers. We can anchor in front of the coasts of Graziano Cape, a small peninsula right next to the Fossa delle Felci Volcano, to relax and have lunch. Skirting the coast, we’ll discover nearly vertical cliffs towering up to 500 metres in height. 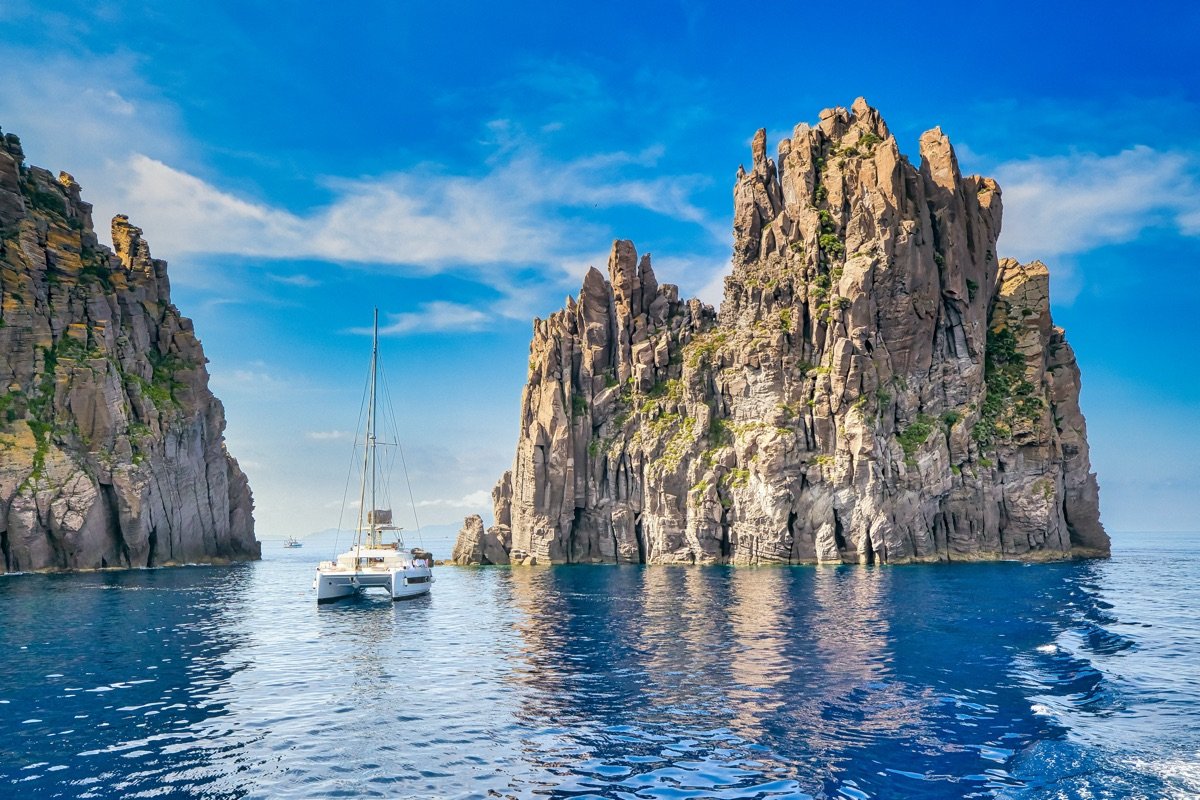 The island of Vulcano with its smoking sulphur crater is surrounded by a coastline of bays, caves and grottos and at its northern tip has an eastern and western bay where we may anchor to go ashore or spend the night. Swim in the sulphur rich waters or coat yourself in mud at the pools in the western bay. Depending on how active Vulcano is at any time, it may or may not be permitted to climb it but if you get the chance, it is an experience to be remembered. 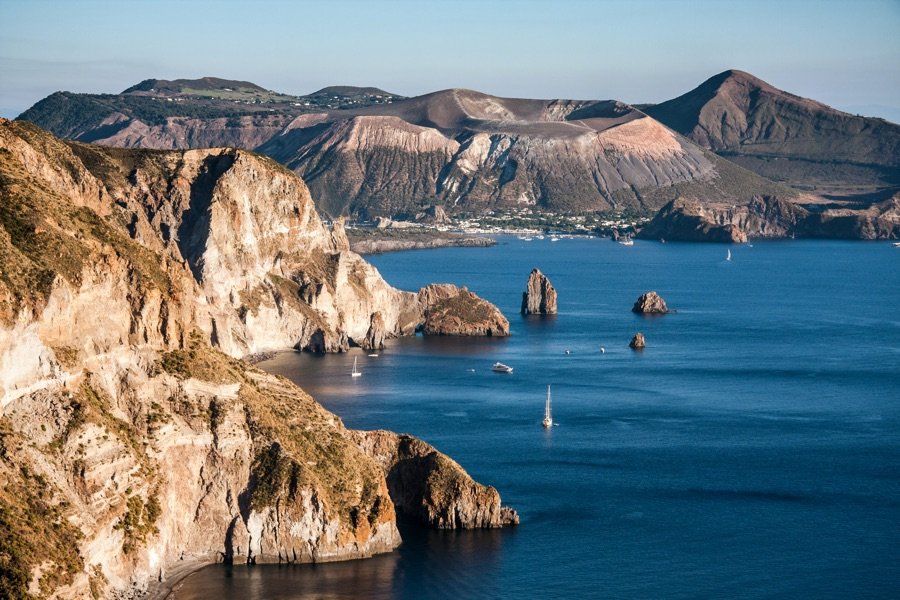 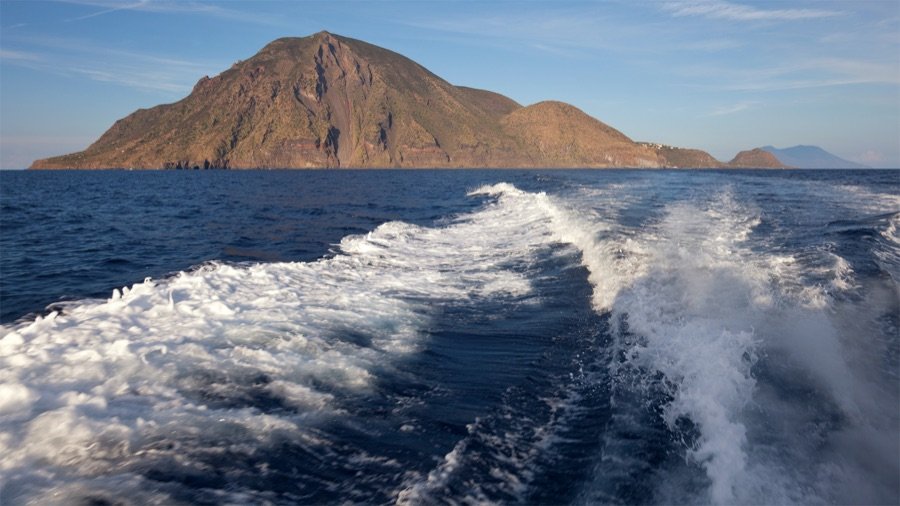 On a 7 day trip, we will go ashore and tour Vulcano, Lipari, Panarea, Salina and Filicudi. Because we stop for Shabbat in Lipari, we will not have time to visit all 7 of the Aeolian Islands. Depending on the weather, it is likely we will sail around Stromboli at night to see its ‘fireworks’ but not stop there (since current regulations do not allow us to climb the volcano anyway) and we will not visit Alicudi due to the distance.

On a 7-14 day trip, we will be able to visit and go ashore on each of the 7 islands – Vulcano, Lipari, Panarea, Stromboli, Salina, Filicudi and Alicudi. We can spend more time on each island, our trip will be more relaxed and there will be more time for tours, side trips and diving if you wish. We may also be able to visit towns on the Sicilian mainland including Cefalù or Milazzo. You don’t have to stay with us for all 14 days and we can arrange to return to our base at any time.

On a trip of 14 days or more, we can offer a combined sea and land tour with a kosher concierge who will arrange an incredible luxury kosher itinerary in Tuscany, the Amalfi Coast, or anywhere else in Italy or the South of France. The plan will be custom built with you to include 7-10 days on our beautiful catamaran visiting the 7 volcano islands and then a transfer to Rome, Naples, Florence or other starting points to set off on a road tour that can include stays in 5 star luxury hotels and amazing kosher cuisine. Our team will work with you to design a breathtaking vacation that incorporates just the level of culture, walking, relaxing, history, museums and touring that you desire.

We’re looking forward to raising the sails and dropping the anchor with you! In 2023, we will be sailing around the Aeolian Islands in North Sicily and offer 7 day tours throughout the season. Unless otherwise stated, each trip is 7 days from Tuesday 14:00 to Tuesday 09:00 departing from Portorosa, Sicily. Trips longer than 7 days can be arranged (and are more relaxed with more time to see all the islands). Please speak to us!

What IS NOT included?

Book the Boat or a Cabin?

Exclusively for you, your friends or family

The entire boat and crew will be exclusively for you and you can fill any or all of the cabins with up to 12 of your family or friends in the 4 double cabins with en-suite bathrooms, the single room with 2 single bunk beds and the sofa bed in the salon for 2 more. The base price is for self-catering (we provide the ingredients but you do the cooking!) and there are options to add in a private chef to prepare 3 meals a day and/or a host(ess) to help with the smooth running of the boat, to clean, tidy, prepare cocktails and look after you!

The price includes a 5% full boat discount. There is a modest supplement for use of the 5th cabin (if there is no crew on board other than the skipper)

Book a cabin or 2

Join other singles or couples

If you are single or a couple, you can just book a cabin (or 2!) and we will do our best to match you with other like-minded people. In this case, the trip is only confirmed when all 4 cabins have been booked. The group will get to know each other and spend the week having fun together on and off the boat and working as a team to drop the anchor, sail the boat and prepare meals.

Keep in mind that if you can find friends or family to join you and fill the boat, you will be able to take advantage of the reduced price for booking the entire boat. Note that the ‘upgrades’ of chef, hostess and fleishik are only available if all guests on your trip agree to pay the supplement.

Options (only available if you book the entire boat):

Please fill in the details below and we’ll get back to you. Your booking will not be final until we receive a deposit and you receive confirmation by email.

Travel to/from the base:

Kashrut and other Dietary Requirements:

Sign up for our newsletter. Future sailing plans and past sailing stories direct to your mailbox.